If you weren’t at ThinkTank, you missed out

A few dozen of the top internet marketers got together for 3 days at this exclusive event in Del Mar, just north of San Diego. Great food, plenty of drinks, and even better sharing of Internet marketing secrets.  Invite only, since it’s not a conference, but a place where already successful people get together to network and share. The other thing is that we all had to sign NDA’s, so I’m not able to spell out exactly what I learned here. 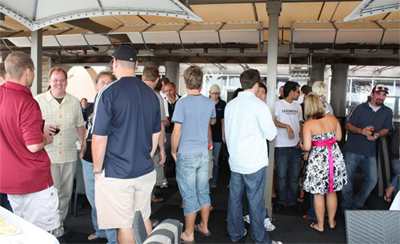 But what I will tell you is that the $3k entry fee is a fraction of the value of what I received in terms of knowledge and relationships. It’s the best learning that I’ve had in the last 3 years, with no disrespect to Shawn Collins, Danny Sullivan, or Barry Smyth– largely because of the close networking

I also got to wrestle with Robert Drysdale, 6 time world champion in Brazilian Jiu Jitsu.  Yes, he kicked my ass– see pictures below as proof.  Looking forward to spending more time with Robert and Sean at their Las Vegas Jiu Jitsu facility at PubCon in a couple months.

Shoemoney has no shoes. Don’t let this happen to you!

This past weekend, ThinkTank attendees stayed at a beachfront hotel– a beautiful resort on the coast, north of San Diego.  A perfect stay, except for the scene created by a rude hotel employee.  In his defense, he’s got a stressful job– working 80-90 hours a week, primarily wandering about the bar and being social with drunk guests.  This is a story of a guy who made a bad thing worse, deciding to take his anger out on professional Internet marketers.

Jeremy Shoemoney was sitting in the hotel lobby, wearing no shoes at this beach resort.  This punk employee yells at him to put his shoes, on in front of a dozen friends.  Treated like an idiot in front of his wife and friends, he refuses– and the punk goes nuclear instantly.  He calls over multiple security guards and attempts to throw out Jeremy.  By now, everyone else is interested in the disturbance– it’s become an ego battle.

Shoemoney Vs. The Incredible Hulk

Fortunately, George Avery steps in help, getting in the middle of two yelling men, in the process being threatened to be thrown out, too.  The hotel employee threatened to throw me out, too, which was irritating, but I kept calm.  Certainly, this fellow was quite important, as he kept asserting his right to throw out anyone in the hotel.

Now there’s a blog at ChristopherPuffer.com– it ranks #1 for “christopher puffer” on Google, by the way, since so many people are linking to the site.  And the hotel management continues to deny that Puffer was in the least bit out of line or slightly aggressive.  Even Puffer continues to say dumb things.  I’m surprised the hotel management hasn’t swooped in to silence him, issue an apology and have the situation go away.

Remember the video on United breaks Taylor guitars?  Or perhaps the untied.com site?  Those customers were so pissed off that they took the effort to write songs and build websites, which in turn, were picked up by the press.  All the while, the company sat on the sideline, continuing to deny any wrongdoing.

Can you think of examples where you had a bad experience and wanted to tell others?  Amazon has a book on how satisfied customers tell 3 friends, while unhappy customers tell 3,000.

I’m surprised that more companies aren’t including social media training for employees.  But an ounce of courtesy would prevent such situations from flaring up in the first place.

If you find this interesting, put a link to this story on your blog– or just link to ChristopherPuffer.com. I’ll keep you updated with what I hear from the hotel staff and their PR agency.  The PR agency’s site is a 404, by the way.  And next time you see Shoemoney, tell him to keep his shoes on!

Have you seen the parody site about whether Glenn Beck murdered a young girl in 1990?  Obviously, he didn’t.  The site’s author put up the site because Glenn Beck used rhetoric to pin Representative Keith Ellison, a Muslim, to offer proof that he wasn’t working with the enemy.  Outrageous claim, of course.  So this guy gives Beck a taste of his own medicine with this satirical blog.

The day before Affiliate Summit East in NYC, last Thursday, I attended a ULS get-together on Local. There were almost 100 people there– perhaps half from start-ups looking to network or pitch their product.  Entry fee was $20, but $10 if you do a 60 second pitch.  I am cheap, so I did the pitch.

After the pitching, there was a round table with Court Cunningham, CEO of Yodle– then the CEOs from outside.in, growthspur, and 8coupons.  Clearly, I was there to meet Court, as he is a competitor in the local space.  Panelists agreed that:

I was overall impressed with the quality of the networking– at the same level as Silicon Valley, with a touch less pretentiousness. The free pizza, provided by Seamless Web, was also a nice touch.

Afterwards, I had the pleasure of meeting Graham Lawlor, founder of of Ultra Light Startups.  The concept of being ultra light is that you don’t need venture capital– just a couple folks with a great idea and a lot of resourcefulness. Looking forward to seeing how these informal groups (including TechStars and YCombinator) help young entrepreneurs achieve their dreams.

If you’re looking to start your own business, want to network with other startups, or perhaps need a bit of inspiration, I’d recommend that you attend one of these events.

How to grow your SEM business in Asia

SEM in Singapore is just starting out. Lots of companies have just started to realise the importance of SEM. For those, that have started for a few years, are only covering the surface. They have not fully explore the full potential of SEM.

To many SEM specialists, this is a golden opportunity. But then, they have to realise that Singapore is a small market. And it cannot sustain their ROI, just by focusing on one market alone.

In many brick and mortar industries, companies are using Singapore as a gateway to penetrate Asia market (i.e Malaysia, Philippine, Thailand, Indonesia, China, Taiwan and Hong Kong). I have only named those countries which have the most potential.

So SEM specialist’s should also do the same. Look at Singapore as a bigger picture to capture the S.E Asia’s market.

But before they do that, there are 2 main areas, which the specialist need to consider before he/she can be successful in S.E Asia. Of course, there are many other key success factors but in this article, let’s discuss about the most basic element.

It will not be as simple as just looking at English keywords. There are Chinese (Traditional and Simplified), Thai, Bahasa Indonesia, Malay e.t.c. So your keywords need to be in local languages.

But don’t assume that by understanding one culture (e.g Chinese), one can apply that understanding to another culture ( e.g Malay). Each culture has their uniqueness and every one of them need a certain level of understanding before the specialist can have some success predicting their behavior online.

Most companies will ignore the 2 areas, thinking their previous success in SEM will ensure success even in Asia. But they will be wrong.

So how can the 2 areas be overcome?

The specialist’s strength is their expertise in SEM. And he/she has tons of experience in managing SEM across different industries.

The specialist might not be able to find the kind of experienced marketer in SEM. So the key is to find passionate digital marketer who have managed digital advertising across multiple regions in Asia and also interested in SEM.

Impart knowledge and experience to them. This can also be the specialist’s contribution to the local online industry by increasing the number skilled people in SEM.

When it comes to multi languages, there is always translation house which can help to translate the keywords to local languages. But the local digital marketer are required to look through the translation to make sure it’s in the right context.

There will be challenge but no doubt that with the right people, SEM specialists can achieve success. But do take note that is no over-night success, it still needs time and some form of testing to really understand the market. Good luck!

My apologies in advance for the math here– I’ll keep it to a minimum to explain the points.

Below is a Google Analytics screenshot from a funeral planning site.  Facebook traffic represents sources 4, 5, and 8.

We’re probably paying 15 cents a click for Facebook traffic, but the 80%+ bounce rate means we’re losing 4 out of every 5 folks on the landing page.  With Google AdWords, we’re paying 50 cents a click, but bouncing only 42%– in other words, losing 2 out of every 5 visitors.

So with Google, we’re paying 3 times as much per click, but keeping twice as many folks past the landing page.  On a per kept visitor basis, Facebook is still a better deal.

For the analytics smart-alecs out there, let me respond to your points:

Remember a few years ago when Google allowed advertisers to set separate content and search bids?  This is the same thing.

Facebook keeps releasing new features to their self-serve PPC platform. It feels like Google from 2003– are you keeping up?

Did you see that you can target people on their birthdays, in addition to your existing fans, as well as being able to select multiple countries?

If you’re making profits via these new tactics, however small, it’s time to scale them up. If you are a non-spammy advertiser, then I welcome you to sign up for our automated Facebook ad posting platform, which automatically multiples variations of ad creatives and landing pages, then reports back with the best performers.  If you’re selling weight loss, get rich quick scams (also euphemistically called “BizOpps”) or products that auto-renew at insane rates (called “negative option”), then don’t bother, since your ads won’t get approved by us or by Facebook.

But maybe you’re a stay at home dad filming how to home school videos or perhaps reviewing top 10 kids movies, in preparation for the upcoming Christmas shopping season.  Don’t laugh– if you’re an affiliate and you aren’t starting now, you’re late to the game.  Then it makes sense to start promoting your wares.

I’m presenting on Facebook advertising at Affiliate Summit East in 2 weeks, and again, at HostingCon 2 days later.  Come join me!